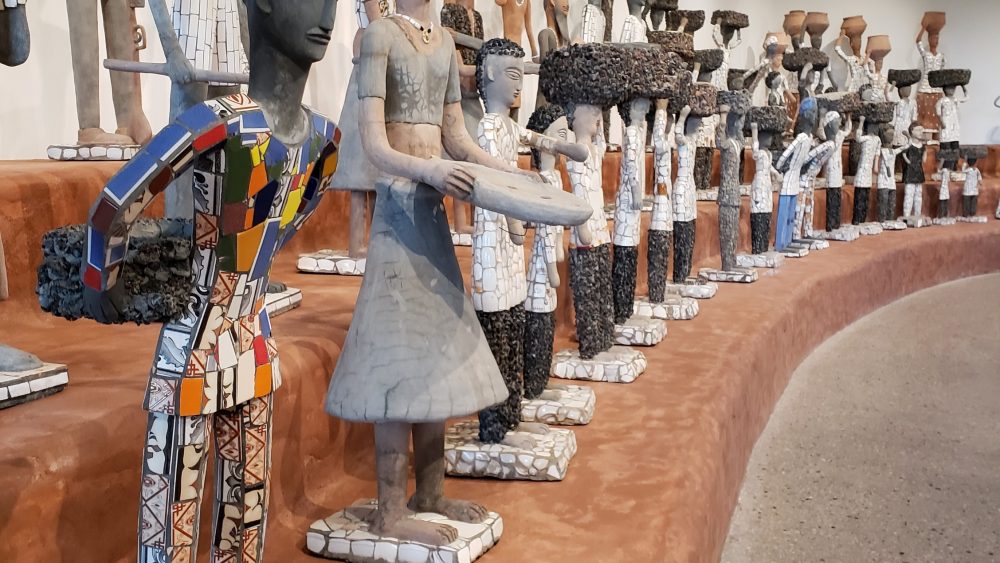 The Art Preserve of the John Michael Kohler Arts Center, The Purposeful Use of Wealth–Sheboygan, Wisconsin (August 2021)

At the end of May of this year, 2021, I came across an article in The New York Times about a new museum about to open in Sheboygan, Wisconsin, that would be devoted to the work of self-taught artists and that would place the art as much as possible in situ, i.e., in the environments in which the artists worked. Having run a gallery for 14 years that specialized in Haitian art, I knew immediately that I had to visit this new museum. So, in August Noel and I made our way to Sheboygan.

The museum is actually an extension of the John Michael Kohler Arts Center, a Sheboygan museum funded by the late Kohler plumbing magnate’s family. For over 40 years the center has collected over 25,000 works by self-taught artists and rescued more than 30 artist created environments. This second location, formally called the Art Preserve of the John Michael Kohler Arts Center, has a dual purpose, to display the art but also to preserve and restore it. The preservation and restoration of art by self-taught artists is often very difficult because these artists use whatever material they have available, glitter and glue, plastic sheeting, tin cans, chicken bones, you name it, as well as traditional art media.

The museum building itself is spectacular with a three-story timber front that covers floor-to-ceiling glass windows set into an industrial concrete shell. A concrete stairwell with hobo signs imbedded into the walls leads the visitor from one floor to the next. The bathrooms on the first and third floors are artist created environments that make interesting use of Kohler plumbing fixtures. A significant amount of museum space is set aside as workshops for the staff to do preservation and restoration work and is closed to the public, but there are windows where you can peek in.

The driving force behind both the Kohler Arts Center and the newly opened Art Preserve was the late Ruth DeYoung Kohler II (1941-2020). Ruth Kohler believed passionately that the creative arts are the keys to positive social change, that is, expanding democratic rights and breaking down the barriers created by elitism in the broadest sense. She spent most of her adult life working tirelessly to make the Arts Center’s mission, “All the arts for all the people,” a reality. For example, she believed art and industry should be allies, so she worked with her brother Herbert Kohler, the head of the Kohler manufacturing company, to set up a residency program on the factory floor where artists and industrial
craftspeople could work together to exchange ideas and technology. The program continues 500 residencies and 20 years later. 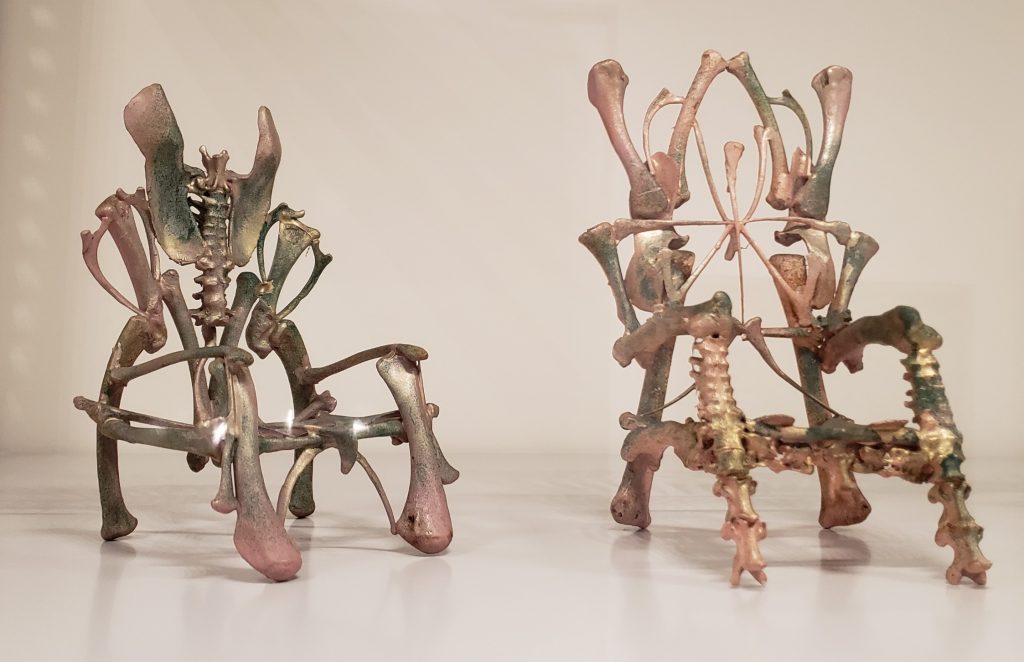 The first floor of the Art Preserve is devoted primarily to upper midwestern rural artists. Wisconsin seems to be particularly rich in self-taught artists. The best known is probably Eugene Von Bruenchenhein. I knew his work through the many pinup photographs he took of his wife Marie. On display is the full range of his artwork, from concrete warrior heads to diminutive thrones made with chicken bones.

The second floor consists of art environments created by urban self-taught artists who interacted with the mainstream art world and includes a recreation of the eclectic collection of artist and teacher Ray Yoshida. As a collector myself, I had lust in my heart looking at his mask collection. Yoshida was an important mentor to the Chicago Imagists.

There is even an artist named Eddie Owens Martin (later renaming himself St. EOM) who emigrated from Georgia to New York City at age 14 and eventually created a new religion he called Pasquoyanism. After his mother’s death he returned to the family farm in Georgia and turned it into a temple complex called Pasaquan, complete with psychedelic mandalas, totem poles and other Native American cultural symbols. The Kohler Foundation worked to restore Martin’s temple complex and now it is managed by Columbus State University. 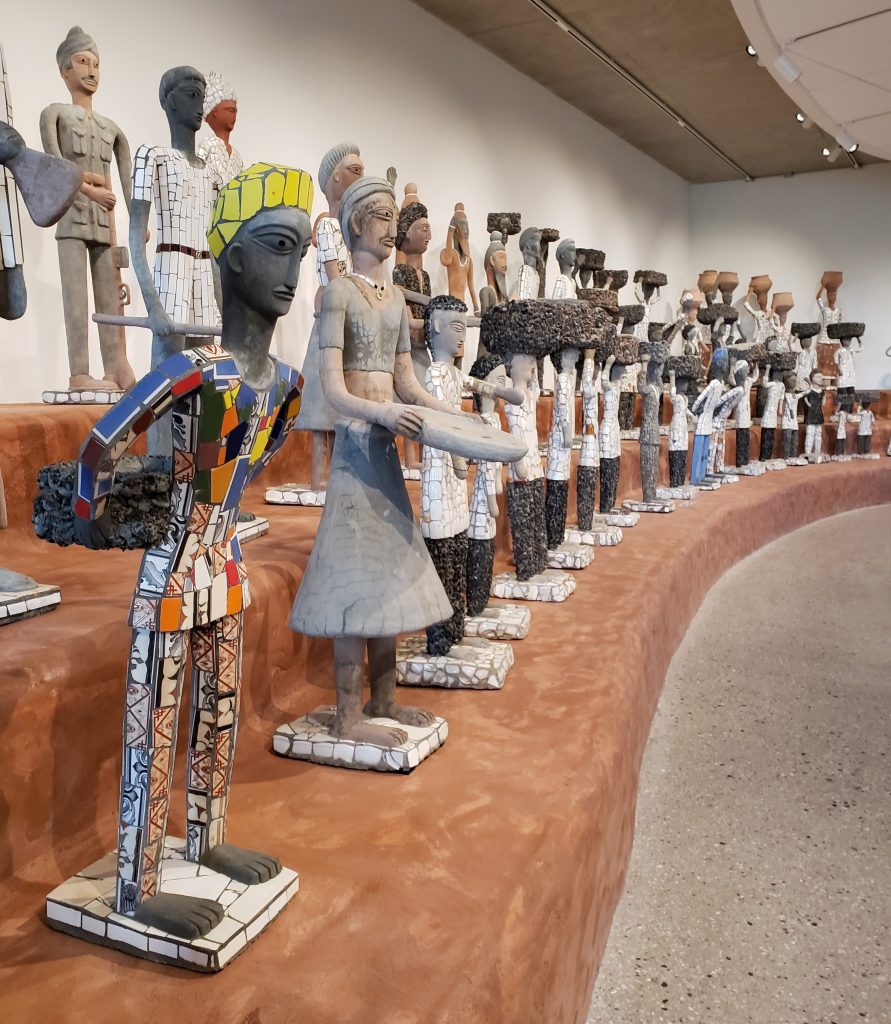 Nek Chand is probably the best known of the three artists. Chand was a road inspector in India who started making a fantasy kingdom in 1965 of concrete and stone “immortal beings” on some unused city-owned land in Chandigarh, India. Of course, his stone kingdom was eventually discovered and threatened with destruction. A public hue and cry saved it. However, to insure his kingdom against any future destruction plans, Chand wisely selected a representative number of his sculptures and donated them to the Kohler Arts Center in 1999. Chand died in 2015. His fantasy kingdom, now called the Rock Garden, is still open to the public and is visited by folks from all over the world.

Dred Scott Asked the Supreme Court to Free Him by Dr. Charles Smith

Noel and I were particularly moved by the work of Dr. Charles Smith. Born in New Orleans in 1940, he was 14 when his father was drowned in a racially motivated hate crime. His mother moved the family to Chicago. A year later in 1955 she took him to view the murdered body of Emmett Till. Smith was being educated about the racism pandemic that our country is still living through. In 1966 he was drafted and sent to Vietnam for two years. Agent Orange and post-traumatic stress syndrome severely affected his health. He spent 18 years trying to regain his health both physically and mentally until he found his vocation as an artist. His work consists of recreating scenes and icons of what he considers coverups of Black history. His pieces are a blend that he developed of mixed media and concrete and are generally displayed outdoors.

By this time I was totally overwhelmed by what we had seen and experienced, so we exited this incredible museum vowing to return next spring or summer. We have traveled very widely on this planet and have visited many outstanding art venues, but the Art Preserve of the Kohler Arts Center is one of the very best.

Noel and I stayed in downtown Sheboygan at the all-suite Grandstay Hotel. It is within easy walking distance to several excellent restaurants of which the city has a significant number. The hotel is quite economical and offers good size two-room suites with reasonably equipped kitchens, but the bed in our suite was only a double. A very basic breakfast is on offer in the lobby and you can get decent coffee 24/7. I highly recommend dining at Trattoria Stefano. We ate there on a Monday night when most of the other eateries are closed. I have rarely seen a restaurant so busy but at the same time still offer excellent service and superior food. We had a terrific veal ossobuco served with saffron risotto, roasted beets and fresh sautéed spinach. The bar makes superb martinis.

We also dined well at Field to Fork for lunch and the Black Pig for dinner. When we return next spring or summer, I want to try The Duke of Devon which offers pub grub like battered walleye tacos and cottage pie made with local beef and root vegetables. Sheboygan is on our return list, much more to explore.